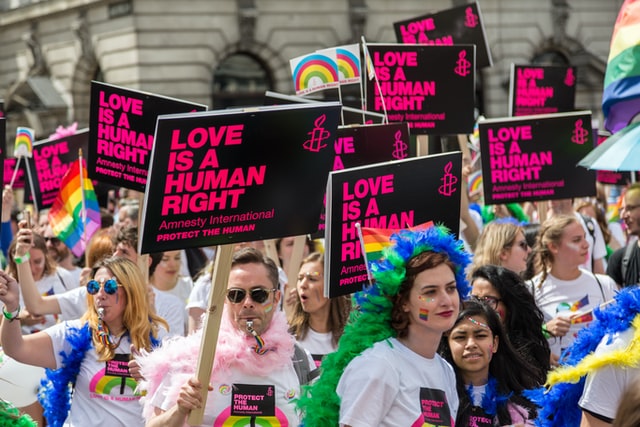 Employment law advice about homosexuality and the workplace

Employment law protects an employee who is gay from unfair treatment. The Equality Act 2010 means that an employment tribunal will judge as illegal unfavourable treatment of an employee or worker by an employer on the basis that the employee is gay, lesbian, bisexual, or, indeed, heterosexual. Having a particular sexual orientation discrimination against a worker is also illegal because he or she is associated with people with an particular sexual orientation. Gender reassignment, and people in civil partnerships are also protected under the Act.

Employment law recognises discrimination as direct or indirect, and also victimisation, and harassment. The protection covers: recruitment, employment terms and conditions, pay, training, promotion and transfer, redundancy and dismissal. The Act protects all employees, short or permanent contracts, job applicants, trainees, contract workers, office holders, company directors and partners, those who are on secondment and the self-employed.

Direct discrimination is unfavourable treatment of an employee because they have particular characteristics recognised by the Act or is perceived to have characteristics or an association with people with those characteristics and this includes sexual orientation. The motivation of the employer is not relevant.

Indirect discrimination occurs where a rule, or a practice, provision or criterion, implemented in the workplace and which applies equally to all persons, puts an employee at a disadvantage, compared to other employees, because of particular characteristics that includes their sexual orientation. Whether the discrimination is intentional or indeed obvious is not relevant.

Harassment is degrading, offensive, intimidating or distressing behaviour that creates a hostile working environment and is aimed at a worker because of the worker’s sexual orientation. It includes abusive language, excessive monitoring of work, excessive criticism of someone’s work , etc. A tribunal’s judgement about harassment is partly based on what a ‘reasonable person’ says is offensive to the dignity of the victim. Employment law also protects employees because, as stated, they are perceived to have a sexual orientation or are associated with a person who has an orientation. Also, any worker who is not the target of harassment but is a witness to it, in extreme cases, can lodge a discrimination case in an employment tribunal. If an employer is made aware of such harassment and does not take reasonable action to prevent it, then an employment lawyer could take legal action.

Victimisation occurs when a worker is treated badly because he or she made a complaint of discrimination under the Equality Act or if an employee was supporting a complaint or made it known they intended to support another worker making a discrimination complaint. An employment law solicitor , providing employment legal advice would counsel an employer not to threaten to sack a worker who has volunteered to be a witness in a case brought under the Equality Act.

Employers can treat employees with a certain characteristic more favourably than others in some circumstances. An employer must be able to show that such treatment is a ‘proportionate means of achieving a legitimate aim’. Commonly, this is where a characteristic is an occupational requirement of the job. An example is where an employer hires a gay person to provide specialist services to gay people. For the discrimination justification to be valid, the employer must show that there was no reasonable alternative. This defence can only be used for direct discrimination.

The best employment lawyers would advise employers to ensure through training that their managers understand what sexual orientation discrimination is, how it can happen, their rights and responsibilities. They would also advise that policy should be developed to prevent discrimination, and what behaviour and actions are unacceptable.

Common forms of discrimination about sexual orientation involves jokes, nicknames and banter. Employees should be made aware that such behaviour is unacceptable because many employees do not consider that their jokes could be unlawful.