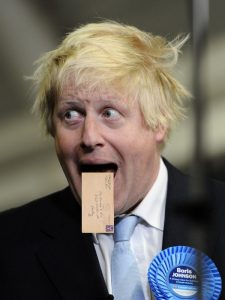 When Boris said that women wearing burka’s looked ridiculous, like letter boxes and bank robbers, did he break any laws?

Since ‘Boris is Boris’ and most people will accept his eminent expertise on looking ridiculous, could his words lead to his collar being felt? If Boris were still Foreign Secretary and he directed his comments at his staff, would it be unlawful?

Cressida Dick, the head of the Met Police has said Boris Johnson’s comments did not reach the bar for a prosecution for incitement to racial hatred.

Whist Boris took the precaution of resigning as boss of a government department before he wrote his article, if written a month earlier, he may well have breached the Equality Act 2010. His newspaper article would have/did offend burka wearing women employees of the Foreign Office – a large government employer. As such, the boss would have breached section 13(1) of the Equality Act 2010.

The Act makes it unlawful to discriminate against a worker or treat the worker negatively, on the basis of ‘protected characteristics’ such as religion. Discrimination could be ‘direct’ if the ‘Boris boss’ spoke to a particular employee or ‘indirect’ if he directed his words at burka wearing employees in general in the workforce.

If he tried to enforce a ban on burka’s in the workplace, whilst permitting other employees to wear symbols of their faith openly, such as Christian crosses, then again this would be less favorable treatment of the burka wearer and in breach of the Equality Act.

Whether it’s a ‘Boris-type’ boss or any other employee, if there is a breach of a company’s policies on how to behave toward fellow employees, the employer should instigate the disciplinary procedure. Given what he said, Boris’ words breach every company’s code of workplace behavior.

The seminal case of Burchill-V- British Homes Stores 1980 sets out the essentials of a lawful disciplinary procedure. The process must start with a reasonable investigation of the facts of the alleged wrong doing.

The Conservative Party has now started the investigation.

If sufficient evidence is uncovered that suggests that misconduct may have taken place, a disciplinary hearing should take place.

Before the disciplinary hearing takes place, the employee accused of misconduct should be supplied with all the material that the employer will rely upon at the hearing.

At the hearing the employee should be given an opportunity to explain his version of events.

Given that the Conservative Party had to be dragged to the point starting of an investigation, it is probably unlikely that dismissal will be a likely sanction – removal of the whip in Boris’s case.

However, for most employees, given the sensitive nature of these matters in the workplace, dismissal is likely to be a lawful response to a finding of this type of misconduct.